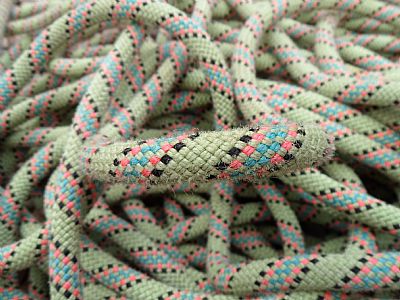 The Review
The Beal Booster III 9.7mm (Dry Cover) is a good versatile rope suitable for a wide range of activities; sport climbing, trad climbing and winter climbing. It falls in to a category of what many traditional British climbers would class as a skinny single rope, however most continental European climbers would consider it more as their go to rope for most situations.

For those climbers more familiar with big heavy 11mm ropes the Booster should be somewhat of a revelation. Even in contrast to the best and most modern thick single ropes (10.5 / 11mm) the Booster is a significant improvement in handling, making it far easier to tie (and untie) knots and clip quickdraws.

The Booster III seemingly dominated the high performance single rope market for a long time as its combination of great handling and relatively good durability offered users a significant step forward in performance.

In actual use the Beal Booster III 9.7mm backs up its stats with exceptionally good handling properties; in back to back tests clipping quckdraws and runners on trad routes the Booster feels easier to clip than its competitors.

Whilst only anecdotal evidence the Booster III seems to survive abrasion better than the equivalent Mammut Tusk 9.8mm in like for like climbing situations (Same routes and same conditions).

In summary the Beal Booster III 9.7mm offers great statistics, fantastic handling and very good durability for a rope of this diameter.